Michael Gillett grew up in a musical household.

Standing by his father's piano at the age of five and singing along he learned to listen, a quality which not only gave him an ear for music but perhaps more importantly an insight into what was to follow much later on. 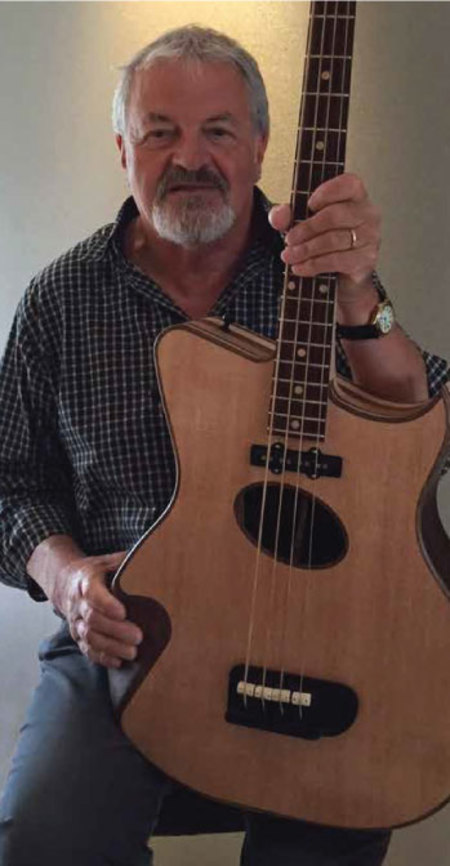 Over the years Michael played in and sung with a number of bands, The Electric Rocking Chairs, The Raymond Kaye Showband, The John Munford Trio with Mandy Sinclair.

These and others were the cornerstone of an appreciation for a wide variety of musical genres both covered and original. Often he would be called upon to improvise and switched from Acoustic Guitar to Bass as situations dictated, and vocals were always part of the gig.

Music was a passion and inevitably a variety of day jobs paid the bills in between.

Some years ago Michael completed a degree in Design and Technology Teaching which proved to be an ideal platform from which to carry out research in instrument design and to develop ideas which would later be incorporated in the Contour four, five and six stringed Acoustic Basses and also Baritone and conventional 6 string acoustic instruments.

Whilst at University, a period as a peripatetic bass and guitar teacher enabled extensive research in ergonomics with students of every age group.

This input was invaluable. Despite a D&T degree, Michael’s long career in music resulted in an appointment to course manage Popular Music Industries at a prominent Somerset sixth form College.

As well as many years of his own experience he sought comment from individual students and focus groups in what became a relentless pursuit of excellence in the design and construction of acoustic bass guitars.

Michael experimented in his spare time and ultimately this became a labour of love to build 'the perfect instrument.'

Finally after many years along this journey Michael has achieved his ambition to produce an instrument which fulfills his vision.

In a part of Somerset in the English countryside a modest production workshop is now producing beautifully hand crafted instruments personally overseen by their creator ensuring every instrument is worthy of his name.